After two months of recovery in Rainbow Fish, Officer Xiao was discharged today

After two months of rehabilitation, on the morning of December 23, Officer Xiao, accompanied by his family and colleagues from the unit, stepped out of the gate of Rainbow Fish Rehabilitation Nursing Home. The smog that once enveloped Hangzhou has completely dispersed and the warm sun is shining. Standing on the ground, Officer Xiao has moved towards a new starting point for him to return to his family and his post! 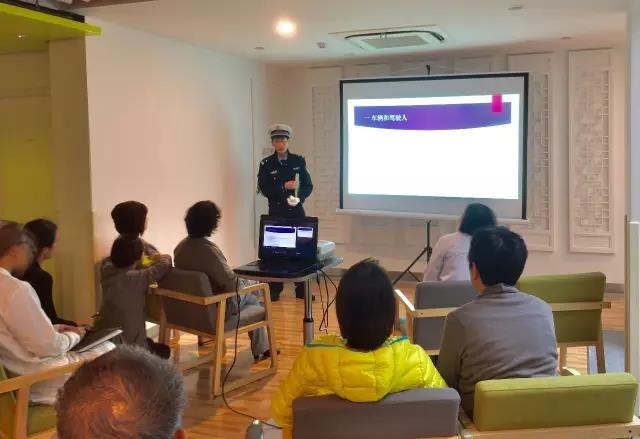 On the evening of June 28, when Xiao Shiqi was on duty at Huzhou Street, Moganshan Road, Gongshu District, he was knocked down by a sedan and caught underneath the car. His life was at stake. More than 20 passing citizens stepped forward and carried away the accident. The vehicle has won precious time for the rescue. After several operations, Xiao Shiqi's life was saved, but because of a severe head injury, he woke up like two people. 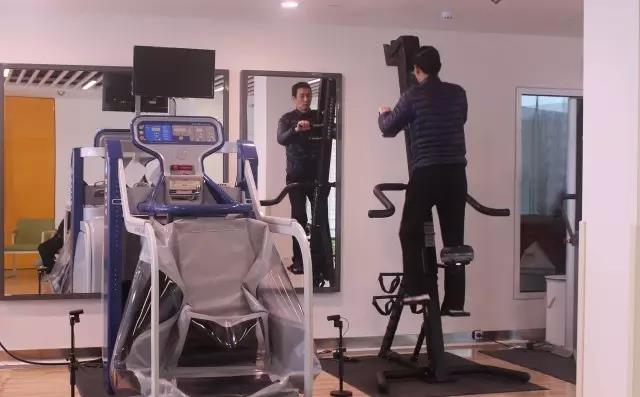 On October 17, under the care of the organization, Officer Xiao transferred to Rainbow Fish Rehabilitation Nursing Home for rehabilitation.

From only elementary school students’ level of intelligence, to writing a rigorous essay; from not daring to look up at people, to confidently taking a traffic safety publicity class for nurses; from not cleaning the doors of the hands and closet, to being able to cook Frying a simple dish... Xiao Shiqi, who was badly injured on duty, is gradually recovering his former high spirited self.

Officer Xiao and his therapists at Rainbow Fish

At 9:30 in the morning, the "Rainbow Fish" family prepared a brief and warm party for Officer Xiao to celebrate his discharge from the hospital, and at the same time send everyone's blessings for his upcoming new rehabilitation phase. Zhang Jianmin, the neurosurgery department of Zhejiang Second Hospital who used to be the chief surgeon of Officer Xiao’s brain surgery, also came to the scene. Director Jin Xin, the attending doctor of Tongde Hospital, also recorded a video during his busy schedule to express his congratulations and congratulations to Officer Xiao’s recovery and discharge. blessing! 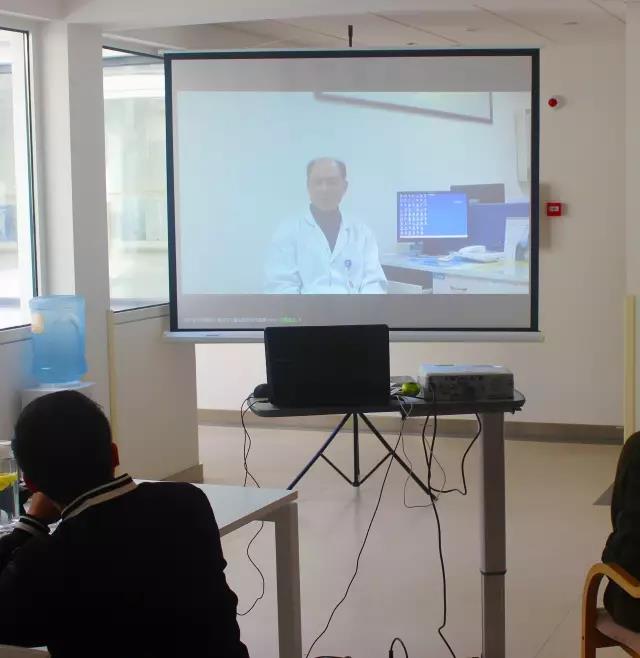 Director Jin Xin, the attending doctor of Tongde Hospital, recorded a video to express his congratulations and blessings to Police Officer Xiao when he was discharged from the hospital. 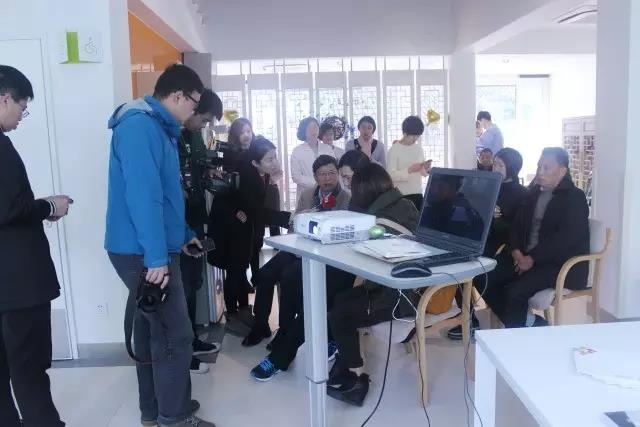 There were also a number of media attending the scene to pay attention to Officer Xiao’s discharge, including "Hangzhou Daily", "Qianjiang Evening News", Zhejiang Online Health Channel, Hangzhou TV Comprehensive Channel "News 60 Minutes", and Zhejiang Public Security Department's gratifying media center "Ping An Times" "Etc., the attention and support of the society is one of the important driving forces for Officer Xiao to return to society. 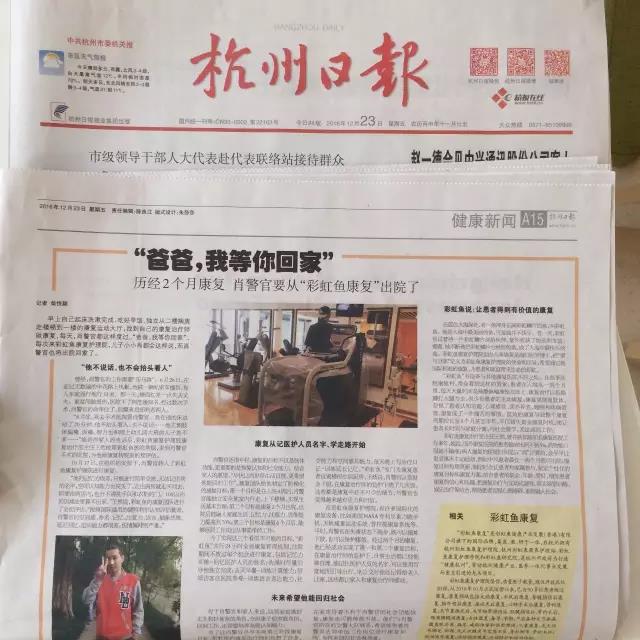 The original text is as follows:

"Dad, I am waiting for you to go home"

After 2 months of recovery, Officer Xiao will be discharged from the "Rainbow Fish Recovery".

Get up in the morning and finish washing, eat breakfast, walk the stairs independently from the second floor ward to the rehabilitation exercise hall on the first floor, and find your own rehabilitation therapist to do rehabilitation... Son Xiao Xiao often says "Dad, I'll wait for you to go home" .

"He doesn't speak, nor does he look up at people"

Once, Police Officer Xiao needed to "press the road" in his work. On June 28, while on duty on Shenhua Road, which he had walked countless times, he was hit by a private car and dragged 32 meters under the car. On that day, Chu Xihong almost lost her husband. Severe head injury, the hospital issued a critical illness notice. After several operations, Officer Xiao's life was saved, but after waking up, they were no different.

"At the end of August, I went to see Police Officer Xiao in the surgical hospital. I stood by his bed for 20 minutes. He didn't look up or talk... He had hemiplegia and facial paralysis on his left side, and his intelligence was similar to that of a kindergartener who just started kindergarten. My son is almost..." After receiving a call from Xiao’s family, Wang Ran, director of the Rehabilitation Department of Rainbow Fish Rehabilitation and Nursing Home, went to the hospital where Officer Xiao had surgery in accordance with the routine of Rainbow Fish Hospital, and pre-assessed him before he was transferred to the hospital.

On October 17, under the arrangement of the organization, Officer Xiao transferred to Rainbow Fish Rehabilitation Nursing Home for rehabilitation.

"His memory is very poor, he can only communicate briefly, he can't remember my name, and his spatial cognition ability is also lost. He can't go back when he walks out of the ward. Even in the ward, he does not clean the door of the hand room and the closet. Door. Addition and subtraction within 100 can’t be calculated.” Wang Ran was very impressed by Officer Xiao when he was admitted to the hospital. Rainbowfish’s rehabilitation team conducted a comprehensive evaluation. “According to the internationally accepted Montreal Cognitive Evaluation Scale, Xiao The police officers’ sense of space, naming, memory, attention, language, abstract thinking, delayed recall, and orientation ability are very poor, and the injuries are particularly serious." 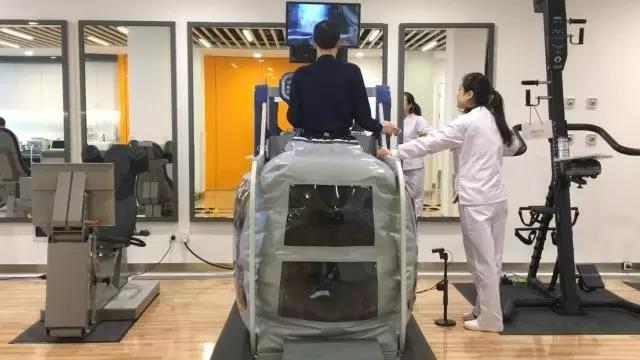 Officer Xiao is still very young. The goal of rehabilitation is not only physical function, but more importantly, the recovery of cognitive and social skills. Combining the wish of his family to "let Xiao Shiqi take care of himself as soon as possible, and hope that he can return to work", the rehabilitation team has set a stepped rehabilitation goal for him-the first goal is to make Xiao Shiqi stay indoors independently and safely 4 weeks after admission. Walk up and down the stairs to achieve basic self-care; the second goal is to recover after 2 months and be discharged from the hospital, to integrate into family life after discharge, and to improve memory, concentration, and thinking skills to 70%; the third goal is to recover after 6 months , Able to return to work to do simple work.

In order to achieve these three seemingly impossible goals, "Rainbow Fish"'s 24-hour comprehensive rehabilitation management mechanism has played an important role. During the hospital stay, the Rainbow Fish team did not let go of every opportunity to recover. During daily rounds, memory training-recall the names of medical staff; try to guide him to complete it independently when taking a bath; buy breakfast-train calculation skills; lead visitors to visit the hospital -Training language skills, social skills and spatial perception skills; writing a treatment diary every night-training to extend memory. "Rainbow Fish" specially set up a simulated living kitchen for rehabilitation patients. Wang Ran said that Police Officer Xiao used to cook and cooked several meals under the supervision of rehabilitation therapists. These are all essential details in rehabilitation. Officer Xiao became more and more energetic and confident.

In Rainbow Fish Rehabilitation Nursing Home, there are many international rehabilitation equipment, such as NASA patented anti-gravity treadmill, sky track weight loss exercise system, Pilates rehabilitation system and so on. Usually, Officer Xiao runs under weightlessness, which can exercise his lower limbs and protect his knees. After two months of rehabilitation, he has successfully achieved the first and second rehabilitation goals. Under the supervision of a rehabilitation therapist, he has been able to take care of himself in daily life, can remember the names of medical staff, and can use Baidu maps to guide travel , When he took the bus, he still remembered to give up his seat to the old man and help the old man beside him... all of these moved his family and the rehabilitation therapist.

I hope he can return to society in the future

For Police Officer Xiao and his family, returning to the family, being a good husband and a good father, sharing the family burden of his wife, returning to work also needs to develop advanced cognitive skills. 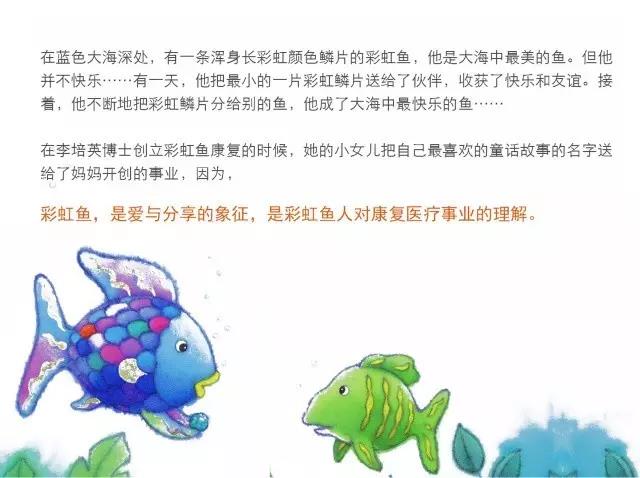 In the depths of the blue sea, there is a fish with rainbow scales, called rainbow fish. She is the most beautiful fish in the sea, but she is not happy. One day, Rainbow Fish tried to give a piece of rainbow scales to a partner, unexpectedly gaining happiness and friendship. Then, she kept giving the rainbow scales to other fish, and she became the happiest fish in the sea. Li Peiying, the founder of Rainbow Fish Rehabilitation and Nursing Home, is a returnee with a doctor of medicine. He defines "love and sharing" as the mission and purpose of Rainbow Fish Rehabilitation and Nursing Home, hoping to bring a rainbow of life to patients and families through rehabilitation of international standards.

There are many differences between Rainbow Fish and other rehabilitation hospitals. In many hospitals’ rehabilitation departments, it is common to see this situation: During the first month or two of admission, patients spend a large amount of time each day being tied to the bed by intravenous infusion. Rehabilitation is mainly done by pulling arms and thighs. Few patients suffer from this. Active rehabilitation; rehabilitation focuses more on the limbs, but ignores the patient’s cognitive function, psychological feelings, nutritional supplements, sleep and pain management, and rehabilitation has become a painful thing. Inefficient rehabilitation causes the entire rehabilitation cycle to be extended to 3 months or even half a year, which not only misses the golden recovery opportunity, but also leaves the patient separated from the family for a long time, disconnected from the society, and unable to return to work. 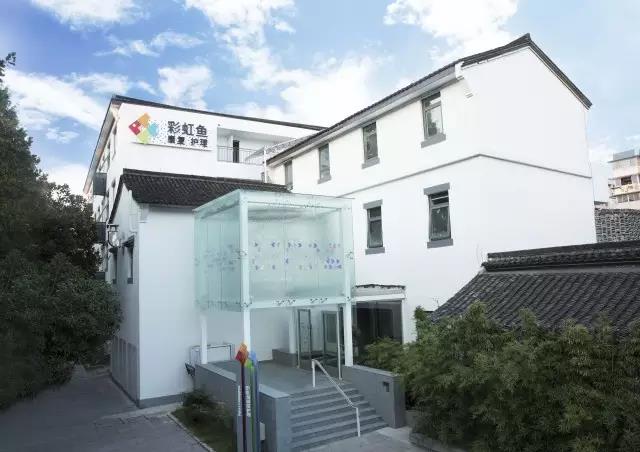 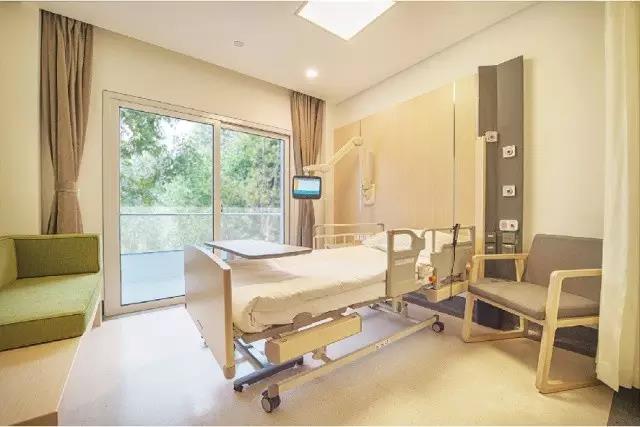 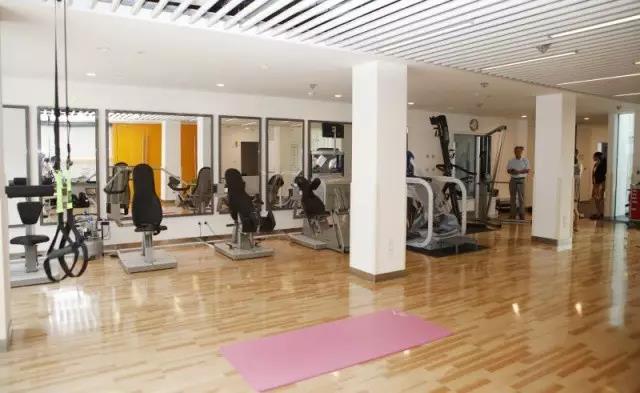 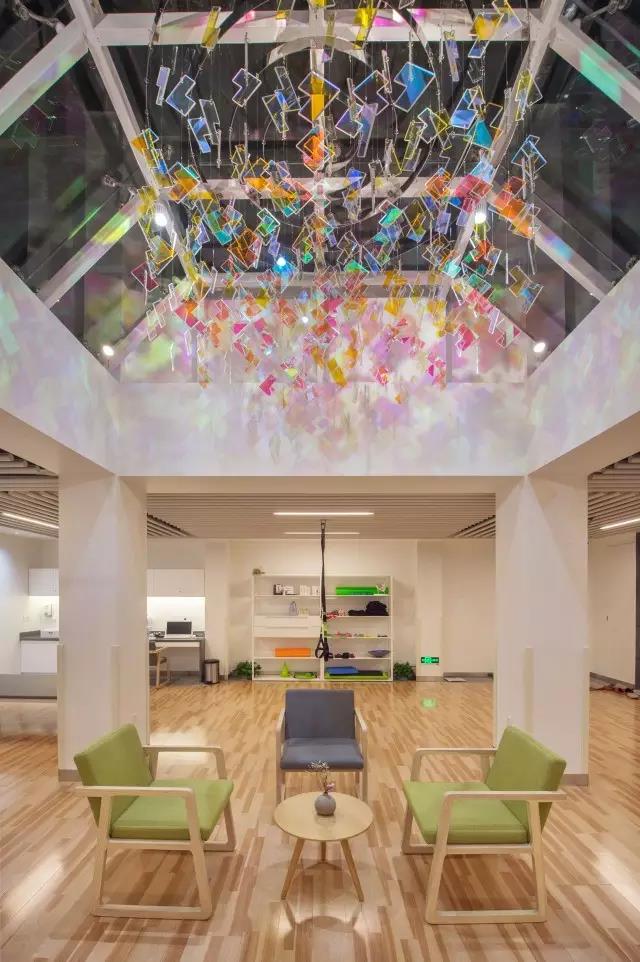 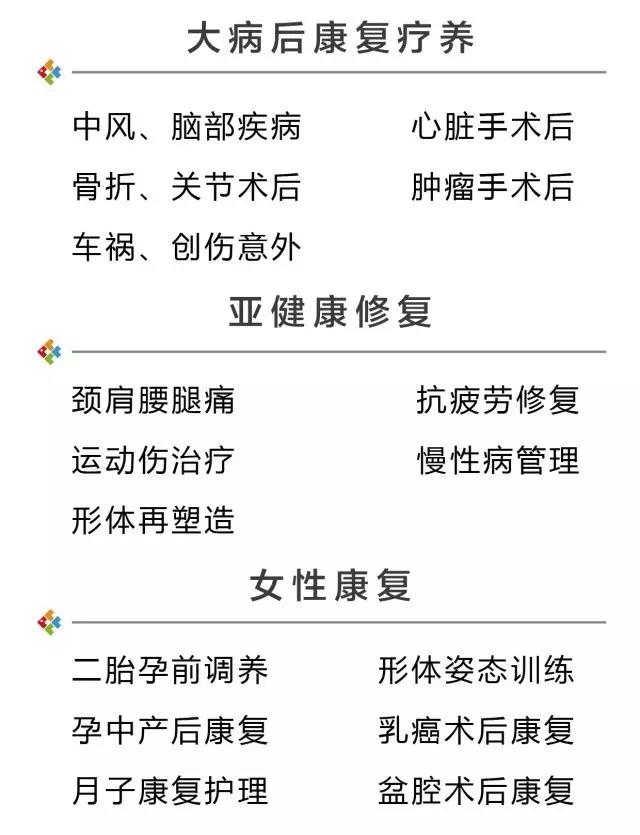 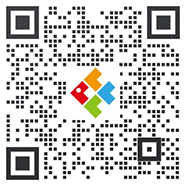 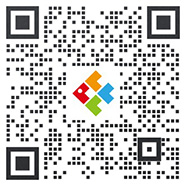